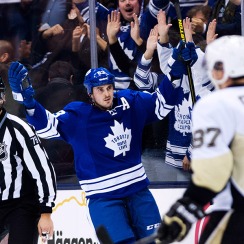 This is a most vexing question these days for Leafs fans.  The William Nylander contract dispute, now in its fifth regular season game, has been quite a conundrum for observers both casual and professional.

There is the one camp that says pay him whatever it takes to both a) get him on the ice soon and b) pay him no more than necessary based on future, assuredly complicated, negotiations with Matthews, Marner and Jake Gardiner.  There is a great core of players in Toronto and the Leaf brass wants to keep them together for a long while.  In order to do so, many believe that the young guns will be required to take less salary to stay under the cap so that they all can stay together….like the Blue and White Musketeers.  Maybe they can stop paying Phil Kessel to eat hot dogs and win Stanley Cups ……just saying.

While the desire to keep WN may be completely naive, the other side of the Nylander argument is that he should be traded (either before or after signing with Toronto, but obviously for Willie, it might be best to have a trade worked prior, so he can negotiate with a new team with likely more cap space).  After all, the Leafs could use a top 10 defenseman who is currently getting paid less than what Nylander is thought to be seeking…..someone like I don’t know, say, Roman Josi at 4mm for 2 years (cue uproarious laughter from Nashville)……We are sure Kyle Dubas will get right on that.

Either way, we thought we would take this opportunity to tell folks what we think Nylander should be signed for based on his arbitration value.  According to our arbitration analyzer, Nylander ranks 5th in Advanced Bracton score per dollar spent.  This is exceptionally good value, and places WN squarely in the upper decile NHL wide.  In fact, at the risk of Leafs Brass getting mad at us, WN was really a 69 point player in total adjusting for our metric.  His best comparables among right wings therefore are Vladamir Tarasenko at 7.5mm per year and/or Alexander Radulov at 7.25mm.  They could argue Evgenii Dadonov at 4mm but good luck on that.  Patrick Laine and Clayton Keller are in this class as well……and when the time comes they are going to get paid.  WN is in excellent company.

Unfortunately for the Leafs, they are looking at the low 7mm range to retain Willie.  This means they may not, given their cap situation, be able to also afford Matthews and Marner, while Gardiner, to us, is very expendable.  If we had it our way, we would try to move Patrick Marleau and his 6.25mm after the season (we know, this is a lot to ask, as Marleau may have value to a team at the trade deadline, but very little as a one year guy, plus his no movement clause is an impediment).  yes we are also aware that a reliable veteran is what teams covet at the deadline, and we know he is a LW and Nylander is a RW, etc etc.  We know, but like everyone else, we are trying to fit WIllie into the future rather than trading him at this nascent stage of what could easily be a 600 point career.

And, as we illustrated earlier, these players do not exactly grow on trees.  However, keeping Nylander a Leaf on the Toronto tree, especially for less than his arbitration value, would allow hope to spring eternal for long suffering Leafs fans for the foreseeable future.